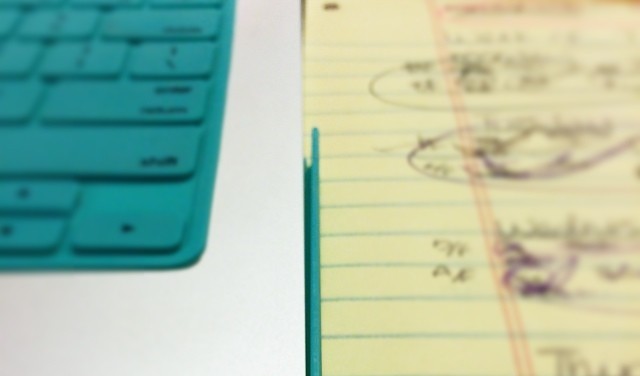 Recently our president, Sam Sturgis, and one of our graphic designers, Chris Auckerman, were in a meeting with a businessman in our community. During the meeting Chris took notes on a legal pad and Sam decided to use the notes app on his phone. The meeting went great. Chris and Sam are both personable guys so there were laughs, there were handshakes and there were decisions made about the project they were working on. The meeting came to a close so Chris and Sam headed back to the office.

A couple days later it came back to us that the same businessman that Sam and Chris had met with mentioned that he really enjoyed both Chris and Sam, but thought that maybe Sam was a little occupied during their meeting. He went on to say that Sam was on his phone the whole time and felt like he had better things to do than talk about the project that they were meeting about. Sam immediately explained that he was taking notes from their meeting so that he could more thoroughly do his job. The misinterpretation was cleared up and all is well!

Generational gaps are real in today’s business world and can sometimes hinder the job at hand. Todays technology offers great tools to make business more efficient and thorough but when young professionals are taking notes on their phone, they may look disinterested instead of detail oriented; or when they are caught texting at work, it may seem as though their social life bleeds into work instead of them talking to a client.

From experience we have learned that technology is good, useful, and should be taken advantage of; however, before you sit down for a meeting with your boss make sure to ask if you can take notes on your phone or tablet, or be sure to mention that your newest client has asked to text about their account instead of talk on the phone. These small instances are becoming more widely accepted, especially in bigger cities, but you know what they always say, “it is always better to be safe than come across rude,” or something like that…